The goal of the project:

After disruption of the restoration work in the castle during the Syrian crisis
due to terrorist attacks,
the Directorate General of Antiquities and Museums of Syria (DGAM) therefore has carried out the necessary studies to enable restoration interventions in response to the fact of avoiding further damages, and in view of the cultural and social importance of the castle.

The restoration project has carried out through three successive stages:

Phase 2: The stage of sorting and documentation according to the latest modern technologies, which will be explained later. It is the most important stage of a well-designed database that facilitates the processes of the business stages.

Phase 3: Restoration and Reconstruction Phase
I. Document collection management
Exterior Facade Restoration:
It involved removing unbalanced parts, then restoring the original stone, and completing the deficiency by introducing new basalt stone, treated in the same manner as the original.

Restoration of the interior facade of the curtain wall. 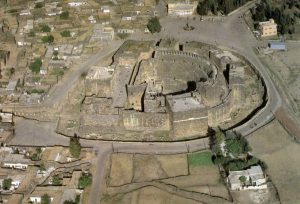 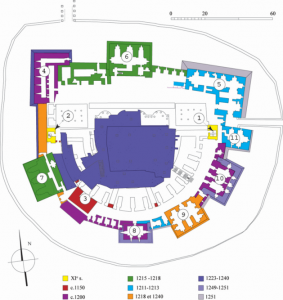